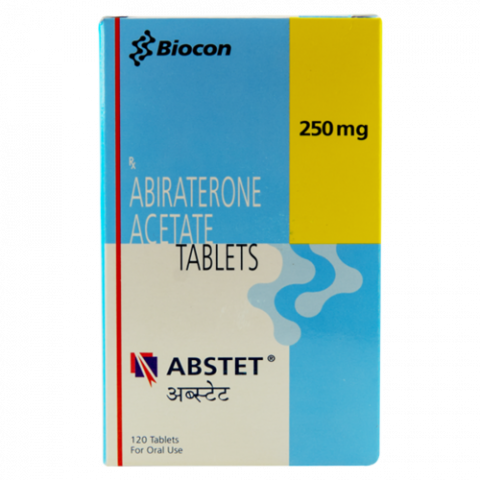 Normally this tablet is taken by combination with prednisolone, a steroid which decreases the liability of side effects produced by Abiraterone.

Androgens are regulates the production of tumors in prostate. Abstet is an anti androgen drugs, which causes to eradicate the enzyme 17α-hydroxylase C 17, 20-lyase CYP17), it is includes in androgen synthesis. Decrease the serum testosterone level. Diminished the tumor cell occurred.

Terminal half life of tablet Abstet is 12 ± 5 hours. The drug mainly excreted in 88% feces and 5% in urine.

The usual dose of Abstet is endorsed as 4 tablets orally once daily The drug Abstet given with 5mg prednisolone twice daily in empty stomach. Abstet Tablets administrated on an empty stomach. No food should be consumed for at least 2 hours before and at least 1 hour after the dose of Abstet Tablets is taken. Abstet should be swallowed whole with water. Do not crush or chew the tablets.

Abstet has no specific antitoxin, If overdose occurs stop the drug and provide general supportive measures such as monitoring arrhythmias and cardiac failure and assess liver function.

If patient having any allergy, severe liver problem, or pregnant, Abstet tablet should be discontinued Do not take other medications, i.e prescription, over-the-counter, vitamins, herbal remedies, etc be sure to inform the doctors before the treatment. Aspirin do not administering and products containing aspirin till doctor particularly allow the drug.

pregnancy category X (leads to fetal death): During treatment if women become pregnant, immediately stop the drug and give counseling to the women. Abstet tablet is not recommended for women.

Abstet is not used in women excretion in human milk is unknown and the drug effects in the nursing infant is unknown.

If patient missed the dose of Abstet, that missed dose will be skipped and follow the regular dosing schedule.