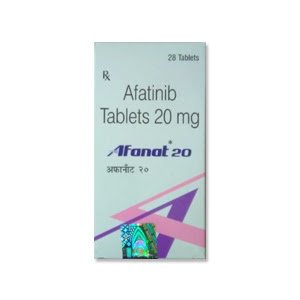 This is a Phase 2 trial examine the performance of a targeted cancer drug known as Afanat 20mg    .
Afanat 20mg    prohibits the EGFR protein, which is accepting to be included in driving the growth of chordoma tumors.
This study is plan specifically for chordoma patients 18 years or older with recurrent or metastatic tumors.
Afanat 20mg    which is used as prescription drugs under the guidance of oncologist physician.

• Time to peak plasma time is 2-5 hr and bioavailability are 92 %
• Human plasma protein bound is 95%
• The major circulating metabolites are covalent adducts to proteins.
• The drug excretion through feces is 85% and urine 4% • Half-life is 37 hr.

For adult: 40mg taken once per day is the prescribed dose for adult patients with metastatic non-small cell lung cancer Age of 0-17 years prescribed dose is not being studied in children.
Avoid using of Afanat 20mg  drug under 18 years of age
The prescribed dose for renal impairment is given 30mg taken once per day
Administration :
Administer the drug Afanat 20mg  on an empty stomach.
Take the drug Afanat 20mg  1 hour before or 2 hours after a meal
Avoid cutting or crushing the tablet
Overdosage: Overdose is reported in patients whom ingested 360mg of Afanat 20mg  which causes in nausea, vomiting, asthenia, abdominal pain and hence provided supportive measurement for recovery.

Serious dehydration can occur with the use of Afanat 20mg  . This may be leads to serious or persistent diarrhea, vomiting, or reduced fluid intake. Dehydration can result in kidney failure, if it is severe enough. While on treatment with this medication, you may be encouraged to drink extra water.
During treatment with Afanat 20mg    will result in hepatotoxicity; monitor with periodic liver testing; withhold or stoptreatment for serious or worsening liver tests
The drug may result in Interstitial lung disease (ILD)
when administrated to pregnant women, Afanat 20mg    will have foetus harm (embryo-fetal toxicity)
Discontinue the drug,  if patients confirm with suspected keratitis or ulcerative keratitis
With Afanat 20mg    have increased sunburn/phototoxicity; may aggravate rash or acne; patients use with caution to limit sun exposure and where sunscreen and protective clothing.
sometimes, Afanat 20mg    has been bind to corneal perforation, a serious injury to the part of the eye which focuses light into the eye. If you have any persistent eye pain or changes in vision, inform your doctor immediately

Co administration of Afanat 20mg    with P-gp inhibitors (cyclosporine A, ketoconazole verapamil) will have high exposure to Afatinib

When interaction of  Afanat 20mg    with P-gp inducers (carbamazepine, phenytoin, phenobarbital) will lowers the exposure to Afatinib

Pregnancy category: c
During treatment with Afanat 20mg    Pregnancy should avoid because the drug Afanat 20mg    is administrated to a pregnant woman will harm the foetus.

Afanat 20mg    Excretion into human milk is unknown or will have adverse reaction in a child who is breastfed. Hence decision can take whether to stop breastfeeding or discontinuation of medicine.

If patient missed to take the dose of Afanat 20mg    , then the missed dose must be skipped and follow the regular dosing schedule. Do not administer double the dose