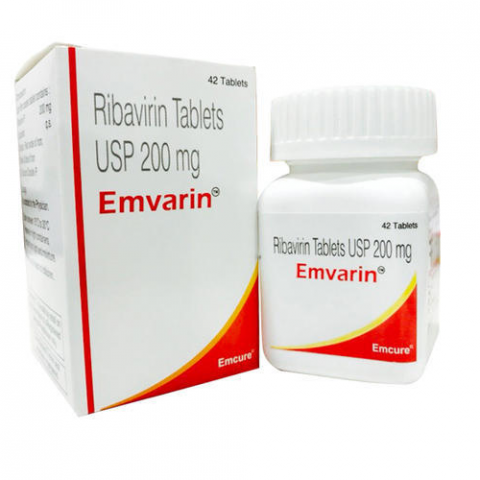 Emvarin   expels anti-viral activity by blocking the nucleic acid synthesis which is used against both RNA & DNA of suspected viruses. Emvarin   is considered as synthetic nucleoside analogue of ribofuranose with anti-hepatitis viral activity

Emvarin   tablet is primarily indicated in chronic hepatitis C viral infection by combining with other anti-viral drugs like sofosbuvir or interferon alfa 2b. Emvarin   is majorly indicated for the patients with the age of 3 years or older with compensated cirrhosis. The most important effect of this therapy is to sustain the virological response rate after the 24 weeks completion of therapy; therefore, it will be obtaining hypothetical HCV RNA after 24 or 48 weeks of therapy.

Patients with the accompanying qualities are more averse to profit by retreatment after coming up short a course of treatment: past non-response, past pegylated interferon treatment, critical crossing over fibrosis or cirrhosis, and genotype 1 contamination. No security and adequacy information are accessible for treatment of longer than multi year.

The mechanism of Emvarin   tablets are; The main mechanisms involved in Emvarin   are prohibition of viral RNA & protein synthesis. Emvarin   undergoes phosphorylation intracellularly with the help of adenosine kinase which get converted into metabolites like Emvarin   mono, di-, triphosphate. Emvarin   triphosphate is a major active metabolite which expels anti-viral activity by prohibiting directly messenger RNA polymerase by competing with nucleotide binding site of the enzyme. Thus, results as to prevent the correct binding of nucleotides, causes diminishing in viral proliferation or production of defective virions. Emvarin   undergoes major activities like; RNA synthesis inhibition Triggers viral genome alterations Viral multiplication inhibition

Emvarin   is highly distributed in plasma and it has high volume of distribution like 2825L. Emvarin   does not bind to human plasma protein.

This metabolite are eliminated renally with the range of 61%; 12% in feces. Nearly 17% of uptake drug is an unchanged form The terminal half life period of Emvarin   about 120 to 170 hours The clearance value of Emvarin   26L/hr

FOR CAPSULES
IN ADULTS

DISCONTINUING THE TREATMENT WITH HEPTOS

In adults patient, who are not accomplish the lower HCV RNA in assay, after 12 weeks or 24 weeks of treatment must discontinue the Emvarin   capsules using therapy.

Some risk factor has to be considered; Emvarin   should not be used as monotherapy; it must be combined with some other anti-viral medication. The major toxic factor of Emvarin   is hemolytic anemia; this may result in aggravation of cardiac disease like myocardial infarction. Emvarin   tablets or capsules may causes Teratogenecity and embryocidal defects while using this tablet in pregnancy period.

Safety precautions provided for reducing this severity; Emvarin   capsules or tablets may produce birth defects; to avoid this risk condition prevents this intake in pregnancy condition.

To avoid the life threatening conditions, frequently monitor the blood counts of the suspected patients before & after starting the therapy.

In this condition, discontinue the Emvarin   therapy

This may occurs due to combination of Emvarin   with alpha interferon, this may prevent by Avoid this concomitant Frequent eye checkup takes place Discontinue the treatment to avoid the aggravation of disorders

These adverse effects may occur due to the concomitant use of Emvarin   with interferon, this may damage the teeth & mucous membranes. Avoid this combination or discontinue the treatment.

This combinational therapy will retard the growth of the pediatric patients, use with cautiously on weight basis manner

Emvarin   capsules co administered with Didanosine causes toxicities due to elevation of exposure of Didanosine& its metabolite. Avoid this concomitant to reducing the adverse effects related to Didanosine. In this combination some fatal liver injury may occur. In HIV/HCV co infected patients who are receiving combinational anti-retroviral therapy for HIV infection, interferon alfa & Emvarin   may have chance of getting hepatic decompensated cirrhosis effect.

The combination of nucleoside analogues with Emvarin   may leads to severe condition like decompensated cirrhosis. To avoid this risk factor care should be taken while concomitating the nucleoside analogues with Emvarin   or discontinue the anti-retroviral therapy or anti-viral therapy. This is because of the reason like; the cell culture anti-viral activity of stavudine & zidovudine against HIV are antagonized by Heptos, this may causes loss of anti-retroviral activity.

The metabolism of Emvarin   is not mediated by cytochrome P450 enzymes, there is no pharmacokinetic properties alteration occurs while combining Emvarin   with drugs metabolized by CYP450 isoenzymes. Co administration of Emvarin   with azathioprine causes various risk factors like, severe Pancytopenia and elevates the exposure of azathioprine associated adverse effects.

During this combination, aggregation of azathioprine metabolites may occur and causes myelotoxicities. To avoid this type of exposure, patient must be investigating by counting the blood cells, including platelets count frequently.

Pregnancy category X Emvarin   should not be recommended for pregnancy period Teratogenecity, embryocidal defects are some deficiencies occurs in fetal cases Breast feeding should not be allowed. The potency of Emvarin   has not been evaluated in pediatric patients with the age of below 3 years and also in HIV/HCV co infected patients.

In some cases only over dosage of Emvarin   should be takes place, in such cases serious risk factors like cardiac disorders, blood related problems may occur. There is no special antidote applicable for the over dosage of Heptos, to avoid this adverse condition patient should not skip or do not take the missed dose without getting advice from the medical adviser. Hemodialysis is not effective in over dosage condition of Emvarin   .

Emvarin   capsules are produce serious illness, if patient fail to take the dose of Emvarin   must be consult with medical practitioner and follow the instructions. On the other way, the missed dose should be skipped and continue the regular dosing schedule.