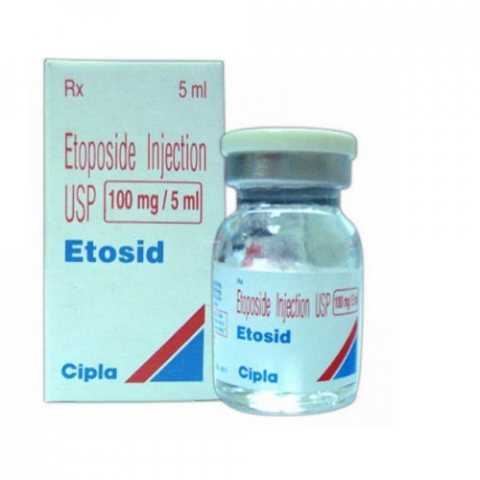 Etoposide has been revealed to cause metaphase capture in chick fibroblasts. Its major effect, however, occurs to be at the G2 portion of the cell cycle in mammalian cells. Two variety dose-dependent reaction are observed. At high concentrations (10 mcg/mL or more), lysis of cells penetrate mitosis is observed. At low concentrations (0.3 to 10 mcg/mL), cells are prohibiting from entering prophase. It does not prevent microtubular assembly. The potent macromolecular effect of Etoposide results to be the DNA strand induction breaks by a combination with DNA topoisomerase II or the production of free radicals.

While using Etosid 100mg will have serious myelosuppression, which could in bleeding and infection, may resulted
If platelet <50,000/mm³ or ANC <500/mm³, withhold further treatment
Patients with decreased serum albumin may be at increased for Etosid 100mg along with toxicities
The drug Posid 50mgshould not inject fastly it may cause low blood pressure to patient; infuse over at least 30-60 min
While using Etosid 100mg Injection site reactions may occur; check closely.
While treatment with Etosid 100mg may cause infertility in females of reproductive probably and result in amenorrhea; premature menopause can occur.

Combination of Etosid 100mg with Apalutamide will reduces the level or effect of Etoposide by affecting hepatic/intestinal enzyme CYP3A4 metabolism.

Combination of Etosid 100mg with Nefazodone will increase the level or effect of Etoposide by affecting hepatic/intestinal enzyme CYP3A4 metabolism.

The drug Etosid 100mg contraindicated to hypersensitivity to Etoposide or any component of the formulation.

Etosid 100mg has pregnancy category D
While administrating to a pregnant woman will cause fetal harm. Hence the drug during pregnancy

Avoid breastfeeding during treatment because of possible risk to the fetus

Etosid 100mg should be stored under refrigeration at 2°C-8°C.
Dispense the drug in tight container.

If the patient missed to take a dose, then should not to take an extra dose, but to take the next dose at the regular time, skip the missed dose.