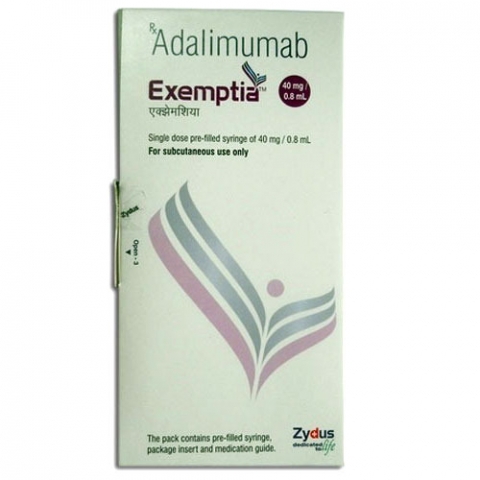 In Ankylosing spondylitis AS:
Exemptia is used to reduce the syndrome of AS Various conditions like crohn’s disease, ulcerative colitis, plaque psoriasis, hidradenitis suppurativa and juvenile idiopathic arthritis.

Exemptia contains Adalimumab exhibits action by definitely binds to TNF-alpha and involved in blockade of inter communication of TNF alpha with its receptors like p55 & p75 cell surface receptors. Exemptia also sophisticated in lyses of surface TNF disclose cells in vitro in the presence of completion.

In RA, PA, & AS
The usual recommended dosage of Exemptia in these conditions, 40mg should be administered for every other week through subcutaneously. Other medicines like methotrexate, NSAIDS, glucocorticoid, salicylates, analgesics, or DMARDs may be carrying out during the therapy with Exemptia. In some patients, methotrexate is not used for combination. In this condition the dosage frequency of Exemptia is elevates to 40mg for every week.

In adult crohn’s
In this conditions, the recommended dosage of Exemptia is 160mg starting at day 1 (administered as four 40mg in a day or two 40mg per day for two successive days) proceeding with 80mg two weeks later (day 15). After two weeks, day 29 starts with continuance dose of 40mg every other week. Aminosalicylates, corticosteroids, or Immuno modulatory agents may be used during the therapy.

In ulcerative colitis
The recommended dosage of Exemptia is 160mg starting at day 1 (administered as four 40mg in a day or two 40mg per day for two successive days) proceeding with 80mg two weeks later (day 15). After two weeks, day 29 starts with continuance dose of 40mg every other week.

Plaque psoriasis
The recommended dosage of Exemptia is starting with 80mg, which is followed by 40mg for every other week, initiate one week after the initial dose

How to take Exemptia
Exemptia is a prefilled syringe, single use. Exemptia is administered through subcutaneous; with maintenance therapy at every week

EXEMPTIA PRECAUTIONS
To reduce the serious infections, avoid concomitant use of Exemptia with methotrexate, Anakinra etc Before starting the therapy, patient should be examine whether presence or absence of tuberculosis in active or latent stage. Exemptia therapy should not be recommended for the patients who are infected with active tuberculosis.

Risk takes into consideration while starting the therapy;
1. Severe or frequent infection
2. Patient exposed to tuberculosis
3. With the history of an opportunistic infection
4. With viral, fungal or bacterial infections

Patients should be frequently monitored, the signs and manifestation of tuberculosis The exposure and advantages of TNF-inhibitor therapy including Exemptia should be taken into consideration, before initiation of therapy. To reduce the risk of non-melanoma skin cancer or other malignancy In pediatric patients, Hepatosplenic T-cell lymphoma occurs during the TNF blocking therapy, this may occur due to combination of TNF blocker with other immunosuppressant Post marketing hypersensitivity reactions occurs like anaphylaxis, angioneurotic edema and other allergic conditions may occur. In this condition Exemptia should be discontinue and provide alternative medicine.

While using with anakinra causes severe adverse reaction related to anakinra, avoid this concomitant Autoimmunity occurs during the therapy with Exemptia , lupus like syndrome occurs Immunizations, concurrent usage of Exemptia with live vaccine should be avoided While using abatacept with Exemptia causes serious infections, use Exemptia alone.

If Adalimumab combines with anakinra (interleukin 1 antagonist), or other TNF blocking agents may have increased the risk of adverse effects like neutropenia. Avoid the combination of Exemptia with Anakinra. Exemptia increase the adverse effects of Anakinra Live vaccines should not be concomitant during the therapy using with Exemptia In rheumatoid arthritis, Exemptia is combined with methotrexate causes depleting the apparent clearance of Exemptia

No contraindication occurs in the therapy. Some anaphylactic reactions may occur, if patients are contraindicated to the component present in the product Exemptia Severe infection like sepsis, tuberculosis occurs Moderate to serious heart failure occurs.

Pregnancy category: C Exemptia should not be recommended in pregnancy condition; placental transformation is applicable Exemptia used if it is necessary only getting advice from medical practitioner

Breast feeding should not be recommended

Exemptia is an Anti-rheumatoid agent, used cautiously If patient fail to take the dose of Exemptia must consult with medical adviser and follow the instructions On the other hand, the missed dose should be avoided and maintain the regular dosing schedule.