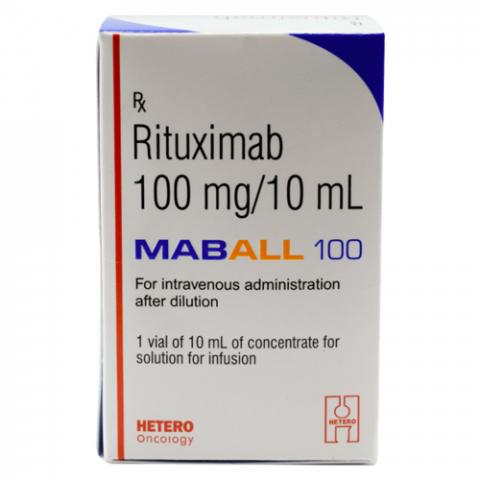 Maball with steroid regimen combination is given for the treatment of some rare disorders which cause blood vessels and other tissues inflammation in the body.

Maball   and hyaluronidase human injection are given alone or combination with another drugs to treat certain types of non-Hodgkin's lymphoma and chronic lymphocytic leukemia (cancer start in WBC). Maball   injection is also used with methotrexate (Otrexup, Rasuvo, Xatmep, others) for the treatment rheumatoid arthritis symptoms in adults that have been already treated with a some type of regimen known as tumor necrosis factor (TNF) inhibitor. Maball   is a type in a classification of drugs called monoclonal antibodies. Maball   is used to killing cancer cells to treat NHL , CLL, rheumatoid arthritis, granulomatosis with polyangiitis, and microscopic polyangiitis by stopping the activity of the part of the immune system that will damage the joints, veins, and other blood vessels and cause damage to organs (heart and lungs).

new type of "targeted" cancer treatment and an integral part of the body's immune system. Naturally the body build antibodies in along with to an antigen which has entered the body and attach to the antigen for destruction by the immune system. An essential cells only aimed by monoclonal antibiotics, they may leads to less toxicity to healthy cell and it is usually treatment recommended only for cancers in which antigens (and the respective antibodies) have been already identified. Maball works by linking to the CD20 antigen on normal and malignant B-cells. Hence the body's essential immune security are initiated to attack and kill the marked B-cells. Stem cells i.eyoung cells in the bone marrow which will grow into the various cell types and do not have the CD20 antigen. After treatment,CD20 antigen allows healthy B-cells to multiply

volume of distribution is 3.1 L

not available The half life of NHL is 22 days and for RA is 18.0 days, GPA and microscopic polyangitis is 23 days.

Maball is recommended to administer only through intravenous infusion not by IV push or bolus.

BEFORE EACH INFUSION PREMEDICATE

Dose is 375 mg/m2 as an IV infusion. Once weeks for 4 or 8 doses administrated for Relapsed treatment Relapsed Retreatment for once weekly for 4 doses administrated. Untreated Previously: given on day 1 of each cycle of chemotherapy, upto 8 doses. In complete or partial response of patient, start with 8 weeks for maintenance following Maball in combination with chemotherapy completed then administer 8weeks for 12 doses as a single agent. Once weekly for 4 dose at intervals of 6 months and max of 16 dose for Non – progression (following CVP chemotherapy completion 6 – 8 cycles) On day 1 each cycle of chemotherapy upto 8 infusions for Diffuse large B- cell NHL.

COMPONENT OF ZEVALIN FOR TREATMENT OF NHL

Maball is administer with methotrexate combination Maball administrating as two dose of 100mg IV infusion 2 weeks separated. When glucocorticoids administered as methyl prednisolone 100mg IV Subsequent course based on clinical evaluation should administer every 24 weeks, but not early than every 16 weeks.

Weekly once for 4 weeks administer Dose of 375 mg/m2 IV infusion While Glucocorticoids combination with methylprednisolone by dose of 1000 mg IV/ day given for 1- 3 days and purse by oral prednisone 1 mg/kg/day are recommended for the treatment of symptoms of serious vasculitis . This drug should intiate within 14 days before or with the starting of Maball   and may continue during and after the 4 week course with treatment of Maball   drug. Safety and not established for subsequent infusion.

Take an Maball amount and diluted to final concentration of 1 mg/ml upto 4 mg/ml as infusion (containing either 0.9% Nacl or 5% dextrose in water). Invert gently the bag and mix the solution. Dispose unused drug left in vial. OVERDOSAGE: If the patients had high dose of Maball then seek immediately to the emergency department or poison control help line. Please consult the doctor for further clarification.

Allgeric condition against Maball   or any other medication informs your doctor. Concerning your past history of drug used which include in prescription, non-prescription, vitamins &supplements, nutritional products just inform the doctor. While using Maball   do not take any vaccination or immunization without taking advice from doctors. Avoid use of Maball   if you are pregnant. It will harm the baby unborn, while using Maball   use correct birth control to prevent pregnancy and for at least 2 weeks after your treatment ends. Maball   may affect the ability to have children in women. Inform your doctor if you planning to pregnant. It is unknown whether Maball   passes into breast milk , avoid breast-feed while on Maball   treatment.

CategoryC : animal studies reproduction shown an adverse effect on the fetus. The drug has no sufficient and well controlled studies in humans, using in pregnant women benefits by warrant use of the drug.

Maball   excreted into human milk is unknown. Due to the drug belongs to large protein molecule, no information is available. Women should not breast feed during Maball   treatment and 12 months following last dose.

Store at 2°C – 3°C
Use the drug before expiry date
Protected from direct sunlight
Do not freeze or shake.
Keep away from the children’s
Discard the unused drug by asking the advice from doctor or pharmacist.

If a dose missed to take at the time then have it suddenly before next dose timing, if time reach for next dose, then skip missed dose and continue and continue the regular schedule. Do not have 2 dose at a same time.