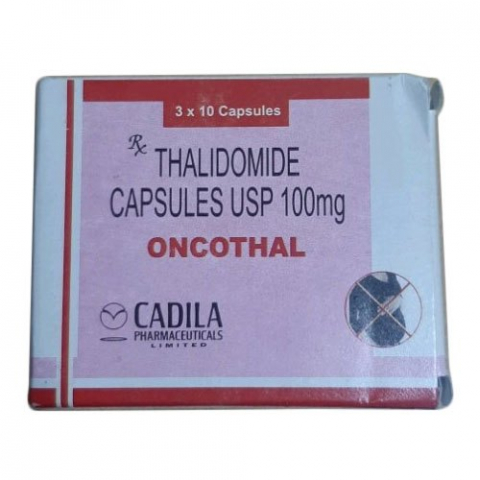 Oncothal 100mg is an antitumor medication

Thalidomide is sold under brand name Oncothal.
Oncothal 100mg is a sedative drug discovered at the end of the 50s, which caused a worldwide tragedy. The drug has been prescribed to many pregnant women to relieve pregnancy nausea.
Oncothal 100mg is a prescription drug which is used under supervision of medical oncologist.

Thalidomide is known to have numerous effects on the immune system (immunomodulatory agent), which may provide to its therapeutic effect. Thalidomide may also change the production and activity of cytokines (growth factors) containing in the growth and survival of certain cancer cells. There may be an effect on the genes which direct the cell's development and activity specific forthose analogues to cytokines (growth factors), apoptosis (cell death), and metabolism.

Peak plasma concentration is 2.9 to 5.7 hours.
The drug Oncothal has Plasma protein binding is 55% and 66% for the (+) R and (-) S enantiomers, respectively.
The drug Oncothal Metabolized hepatically by enzymes of the cytochrome P450 enzyme system.
Excreted in the urine as unchanged drug is less than 0.7% of the dose.
Half-life of thalidomide is 5 to 7 hours.

• When treatment with Oncothal then Sexually mature women who have not go through a hysterectomy or who have not been postmenopausal for at least 24 consecutive months are treated to be women of childbearing potential
• Starting before Oncothal treatment, make sure to inform doctor about any other medications you are taking (containing prescription, over-the-counter, vitamins, herbal remedies, etc.). do not use aspirin, or products contains aspirin until the doctor especially permits this.
• Avoid administer drugs which may cause drowsiness without first consulting your health care provider. Also avoid alcohol.
• In case of both men and women use contraceptives, and do not get pregnantwhile taking Oncothal. severe, life-threatening birth defects may have resulted with even one 50 mg dose. Methods of contraception has two types, such as latex condoms and spermicides, are needed.
• While taking this Oncothal therapy avoid breast feed.

Combination of Oncothal 100mg with cardiovascular medication will cause an additive bradycardic effect and should be used with caution.

When combination of hormonal contraceptives further increases the risk of thromboembolism with Oncothal is Unknown condition.

Excretion of drug Oncothal 100mg in human milk and effects of drug on breastfed infants is unknown.
Avoid breastfeeding during treatment with Oncothal 100mg.