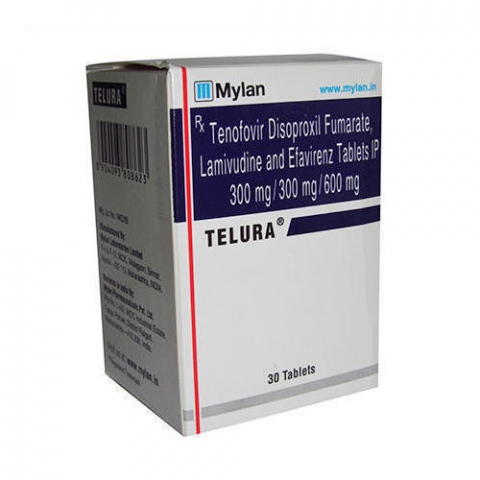 Telura tablets are not used for curing the infection, but it is involved in reduction of advancement of HIV-1 into AIDS. Telura is used to reduce the HIV viral production

The major mechanism of Telura is involved in prohibition of reverse transcriptase enzyme. The enzyme is responsible for HIV viral production.

The tenofovir DF elimination is occurs via glomerular filteration & active tubular secretion. Efavirenz get eliminated via urine Lamivudine eliminated by urine. The half lives of Telura ; Tenofovir: 17 hours Efavirenz: 40 to 55 hours Lamivudine: 5 to 7 hours

Before begin the therapy with Telura , patient should be examined for presence of HBV infection or not. kidney function & liver function test should be performed. The recommended dose of Telura is one tablet should be administered as once daily. Telura is a three drug fixed dose combination; it should be administered on an empty stomach. This tablet should be consumed at bed time due to reducing the neurological problems. Telura should not be prescribed for; Patients who have creatinine clearance less than 50ml/min With severe renal impairment Hemodialysis patient Telura should not be used for; Moderate & severe liver impairment patients

Prevent the problem by measuring the hepatic enzymes level In severe condition stop the Telura treatment.

Telura is a three drug fixed dose combination; there is a chance of occurring resistance. Monitor the patient’s condition frequently.

Reduce the problem by giving Telura at bed time on an empty stomach.

Telura is contraindicated to pregnancy condition

This fatal case is frequently occurred in anti-retroviral therapy. In serious condition stop the Telura tablets. Fat redistribution, discontinue the Telura tablets QT prolongation reduced by avoiding the concomitant use of Telura with drugs which may extends the QT intervals.

Do not self medicate the Telura tablets Storage Telura container should be kept at temperature below 30°C Store the container away from heat, moisture & light

Telura is a three drug mixed dose regimen, caution should be taken during therapy using with Telura tablets. In case of missed dose, patients must consult with medical practitioner & follow their instructions. Maintain the regular dosing schedule Avoid the missed dose if possible