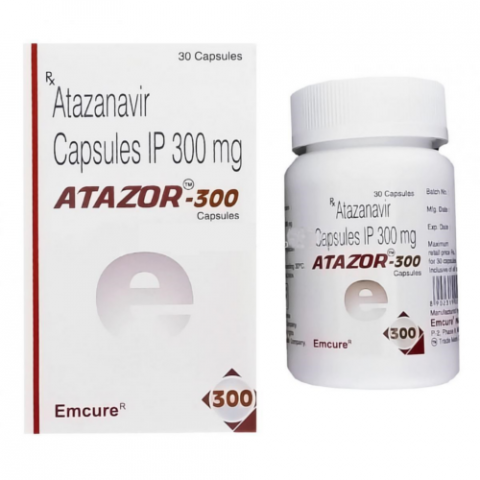 Atazanavir is a chemically classified as azapeptide, which is containing bis-aryl substituent on hydrazine moiety exhibits anti-retroviral activity against wild type & mutant forms of HIV protease.

Atazorcapsules consist of active moiety are classified as protease inhibitor, which is involved in combination with other antiretroviral drugs for the treatment of HIV-1 infections for patients age of years and older weighing atleast 15 kg

While administrating Atazanavir with food will increase the bioavailability and reduce the pharmacokinetics variability. The atazanavir mean oral bioavailability is 60 to 68%. The very quickly absorption of atazanavir is occurs; with Tmax value is 2.5 hours.

Atazanavir is binds to plasma proteins by 86%.

In liver, Atazanavir is highly metabolized,. The biotransformation of atazanavir majorly occurs by undergoing Monooxygenation & Dioxygenation.

The atazanavir half life period of is relatively 7 hours. The elimination half life through liver impaired is 12.1 hours.

Atazanavir should not used alone; it should be combined with ritonavir which is majorly prescribed for therapy experienced adult patients with preceding virologic failure. The higher dose of ritonavir will cause reducing the safety profile of atazanavir. Before starting the treatment with atazanavir; Patients who are going to receiving the atazanavir should be performed with renal function test periodically for both prior and during the therapy. Serum creatinine, creatinine clearance, urine analysis should be checked frequently. Hepatic function test is also performed before starting & during the treatment. In adults: The prescribed dose of Atazoris one tablet should be administered as a single dose by combining with any of the following drugs like; Tenofovir H2 receptor antagonist: The gastric regulator drug should not be exceeding a dose equal to famotidine 40mg as two times a day. Atazortablets should be concurrently administered with & or at least 10 hours after the dose of H2 receptor antagonist. Proton pump inhibitors: The administration of proton pump inhibitor should not superior a dose equal to Omeprazole 20mg and it should be taken 12 hours before the dose of Atazortablets.

Atazortablets should be administered with food. Atazortablets are fixed dose combination; it should not be broke, chew or crush.

In Atazorover dosage condition patient should be; Provide with supportive measures Gastric lavage or emesis should be provided Activated charcoal is used for removing the unabsorbed dose of AtazorDialysis is not successive, because ritonavir is highly metabolized and binds to human plasma protein in higher extent.

This is due to prolonged elevation of PR intervals by atazanavir. Monitor with ECG frequently for reducing the adverse effects.

Check the blood glucose level periodically Patient must be prescribed with dose adjustment insulin or oral hypoglycemic agents. Diabetes ketoacidosis should be occurred after discontinue the treatment. Immune reconstitution syndrome: Stop the Atazortherapy. Redistribution of fat occurred in the body leads to cause obesity. To overcome the problem in severe condition, discontinue the treatment.

Symptomatic elevation of bilirubin occurs by prohibits the UDP glucuronosyl transferase. Dose reduction is not possible, once the level of bilirubin is elevates stop the treatment.

Rash is the one of the most important effect occurred on skin. Atazanavir should be stopped during rashes present.

During the Atazortreatment patient should be monitored with renal function test. Nephrolithiasis & cholelithiasis: To overcome the problem, patient must be provided with additional management. Temporary postponement or discontinuation of therapy is occurring. Adverse effects may occur due to drug interactions, like; Atazorwith drugs are metabolized by CYP3A or CYP3A causes increased concentration of these drugs.

Pregnancy category: B Atazanavir should be used in limited number of pregnant women. Atazortablets should be used with caution only after knowing the risk factor associated with the treatment. Lactation: Breast feeding should not be allowed while the patient undergoing HIV-1 infection therapy.

Atazortablet container should be kept in cool & dry place.

In case of missed dose, patient must be consult with physician and follow the instructions. Maintain the regular dosing schedule. Missed dose of Atazorshould be avoided.