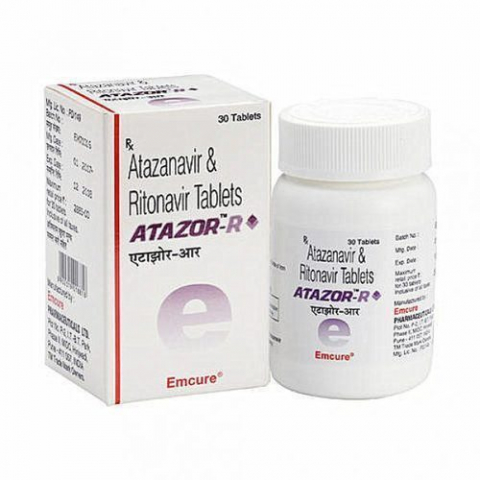 Atazanavir is quickly absorbed with the Tmax of relatively 2.5 hours. If Atazor R is taken with food, leads to increase bioavailability of Atazanavir and depletes its pharmacokinetic variability. Oral bioavailability is around 60-68%

The route of elimination is not known clearly The terminal half life of Atazor R in healthy persons is around 7 hours Hepatic impairment patients 12.1 hours

Atazor R tablets should be administered with food. Depending up on the therapy history of patients or use of other anti-retroviral drugs, the dosage of Atazor R tablets should be recommended. In case of co administration of Atazor R with H2 receptors antagonist or proton pump inhibitors, dose separation should be needed for reducing the impacts. Patients who are treated with earlier virologic failure, Atazanavir without Ritonavir should not be suggested.

The prescribed dose is one Atazor R tablet should be administered orally as once daily with food.

The prescribed dose is one Atazor R tablet should be administered orally as once daily with food.

Do not take Atazor R tablets, if tenofovir & H2 receptor antagonist have taken together. Do not administer Atazor R tablets with efavirenz due to depletion of atazanavir exposure.

Cardiac conduction abnormalities
Atazor R receiving patients may suffer with QT prolongation. Prevent the problem by monitoring the ECG levels periodically.
Serious skin reactions
Severe rash are occurs during the therapy with Atazor R tablets. In serious condition stop the therapy.
Hyperbilirubinaemia
Patients who are receiving atazanavir should be suggested with increased bilirubin levels. Dose reduction should not be applicable in long term efficacy. Prevent this worsening condition by monitoring the hepatic enzymes levels during the therapy. In severe condition, the therapy should be discontinued.
Advanced renal failure
In chronic condition, stop the therapy with Atazor R tablets. Nephrolithiasis & cholelithiasis; Atazor R tablets should be postponed or discontinued.
Diabetes mellitus
During the treatment, patient’s blood glucose level should be elevated. Prevent the problem by measuring the blood glucose level frequently during the therapy. Initiate the anti-diabetic medications.
Fat redistribution
Re accumulation of fat in the body occurs during the treatment, this may leads to cause obesity.
Hemophilia
Increased bleeding occurs during protease inhibitor therapy. Caution should be taken.

Atazor R tablet container should be stored at temperature between 20° to 25°C. Do not refrigerator. Keep away from moisture, heat & light