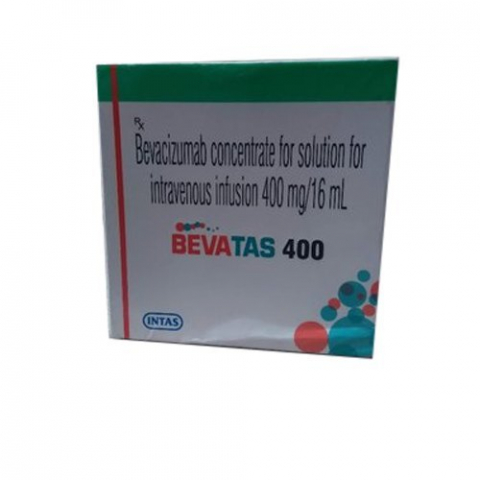 When Bevatas concomitant use with human monoclonal antibody IgG1, that circumstance and prohibits the biological action of human vascular endothelial growth factor (VEGF)

While combining with carboplatin and paclitaxel : The Bevatas usual dosage is 15mg/kg IV for every 3 weeks by

For every 2 weeks : 10mg/kg of Bevatas administered IV

Concurrent use with interferon alfa : The Bevatas usual dosage is 10mg/kg IV for every 2 weeks

There are some complications occurred during treatment with Bevatas , care should be taken Arterial thromboembolic events: cessation of treatment with Bevatas in patients who are suffered with severe ATE. Venous thromboembolic events: Toxicity Incidence should be detected; If severe condition therapy should be stopped. Hemorrhage: While on Bevatas treatment some Serious hemorrhages will occur like GI hemorrhage, hemoptysis, Hematemesis, CNS hemorrhage, nose bleeding & vaginal bleeding. Hence Discontinue the treatment.

Hypertension: Bp is increased in patients who are receiving Bevatas therapy, must be frequently check up with blood pressure and provided with alternative medication for correct the pressure. In hypertension crisis or encephalopathy should be discontinue the treatment.

Posterior reversible encephalopathy syndrome Embryo fetal toxicity occurs : During pregnancy condition Bevatas is contraindicated which produce fetal harm. Ovarian failure: The patients who are receiving Bevatas may have a chance of getting ovarian failure. Congestive heart failure: the drug combination with anthracycline based chemotherapy, treatment with Bevatas must not be used. Bevatas treatment should be stopped while CHF occurs.

While interaction of Bevatas with paclitaxel & carboplatin, causes reduce in exposure of paclitaxel after four cycles of treatment.

No contraindication occurred In some case the patients who are contraindicated to any component of Bevatas may occur hypersensitivity.

Pregnancy category: D While administrating Bevatas in pregnant women, positive evidence on fetal risk depends on human studies but potential benefits by using the drug may have common risk against fetus. Bevatas is excreted into breast milk taking account on this, discussion should done on whether to discontinue the breast feeding or the drug. The drug is risky during mother breast feeding to their infants.

The drug stored at 2 to 8°C (36 to 46°F) Single use vial Dispose the left out vial under the guidance of pharmacists.