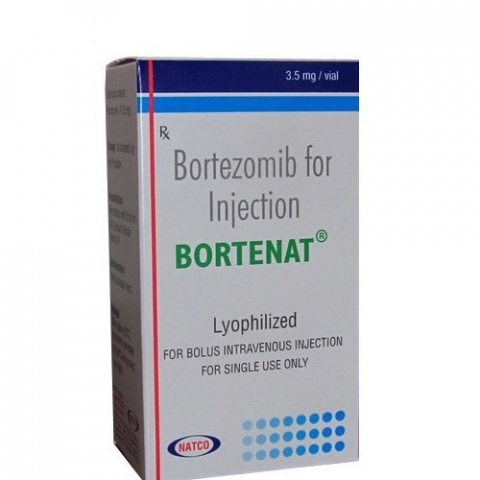 Bortezomib is sold under the brand name Bortenat 3.5mg which is a type of anti-cancer medicine, which is in the form of lyophilized powder A first beneficial proteasome inhibitor is known as Bortenat 3.5mg ; proteasome is a cellular structure which breaks the proteins.

Bortenat 3.5mg injection will helps to prevent from multiple myeloma in patients with or without before treatment history and mantle cell lymphoma.

Bortenat 3.5mg injection used in mammalian cells is a reversible inhibitor of the chymotrypsin-like activity of the 26-S proteasome. The drug prohibits targeted proteolysis that affects multiple signaling cascades responsible for normal homeostatic functions within the cell, leading to cell death.

The excretion pathways of Bortenat 3.5mg have not been characterized. The terminal elimination of half life after the 1mg/m2 dose is 40hrs - 193hrs, after dose 1.3mg/m2 is 76hrs - 108hrs.

Bortenat is administrated alone or combination with dexamethasone Three week course is considered as therapy cycle Atleast 72 hours must slip away between constant doses of Bortenat. Bortenat (lyophilized powder form) is reconstituted by using 0.9% sodium chloride (NS) Bortenat should be reconstituted in 3.5ml NS The route of administration is IV bolus Intrathecal not use for administration In adults:

In the therapy of previously untreated multiple myeloma:1.3mg/m2 of dose must be given as 3 to 5 seconds through IV bolus or subcutaneous by concomitant use with tablet melphalan and prednisolone for nine 6 weeks therapy cycles Cycles 1 over 4, Bortenat is administrated for two times weekly, (day 1, 4, 8, 11, 22, 25, 29 and 32) Cycles 5 over 9, Bortenat is administrated once a week (day 1, 8, 22, and 29)

Moderately, 72 hours should be passing between following doses of Bortenat 3.5mg