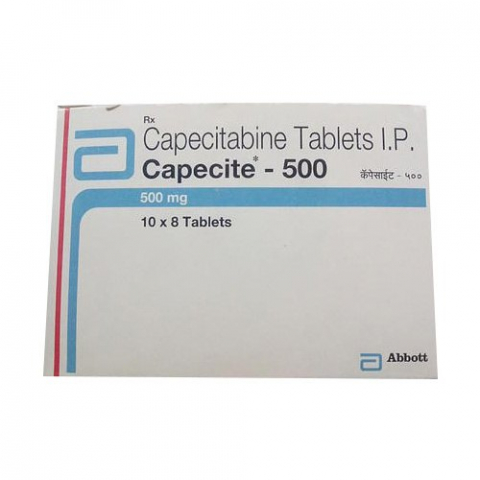 The primary indication of Capecite  500mg :

Capecite  500mg tablets are containing an active constituent Capecitabine which is comes under the derivative of deoxycytidine and fluorouracil prodrug that consisting of anti-neoplastic activity anti-metabolite activity involved in the therapy of colon cancer; breast cancer & gastric cancer.
Capecitabine is classified as an inhibitor of nucleoside metabolite, in which the mechanism involved in this medicine is inhibiting nucleic acid synthesis.
Capecitabine is chemically classified as fluoropyrimidine carbamate associating to class of anti-neoplastic agents known as anti-metabolite.
For breast cancer Capecitabine is used in combination with docetaxel.

The primary indication of Capecite  500mg :

Capecite  500mg is also indicated for the treatment of colon or rectal cancerwhich has become worse condition or spread to other body parts. The drug willinhibits colon cancer from spreading in people after the surgery to remove tumor.

For breast cancer therapies, Capecite  500mg should be used in combination with docetaxel with an advanced stage patient who are resistant to anthracycline containing chemotherapy.

Capecite  500mg is prescribed in the patients who are producing resistance against paclitaxel & for anthracycline chemotherapies.

Cardio toxicity: monitor cardiac toxicity like myocardial infarction, ischemic conditions, or any other cardiac problems during the therapy with Capecite  500mg.
Hand foot syndrome: the dose of Capecite  500mg should be reduced to reduce the toxicity.
Dihydropyrimidine dehydrogenase insufficiency: adverse reactions related to 5-FU is contributed to this deficiency.
Liver insufficiency: mild or moderate liver damage patients administered Capecite  500mg carefully and monitor the adverse effects. Hematological problems: check the blood cell counts regularly before or after the treatment
Embryo fetal toxicity :
Capecite  500mg causes fetal harm, which may causes death.
Pregnancy: Capecite  500mg is contraindicated; produce carcinogenesis, mutagenesis, and fertility impairments.
Diarrhea: anti-diarrheal therapy should be provided.
Coagulopathy:
During the co administration of Capecite  500mg with warfarin, the anti-coagulant response rate should be monitored frequently. This combination may cause severe bleeding effect which leads to death also. By increasing the prothrombin time & INR values, bleeding may occur.
This event may appear within several days & also several months after initiation of therapy.
In some cases after stopping the therapy of Capecite  500mg, may occurs

Pregnancy category: D
Capecite  500mg should not be used in pregnancy and lactating period
The safety and potency of Capecitabine should not been evaluated for pediatric patients.
The adverse events should be monitored periodically in elderly patients.