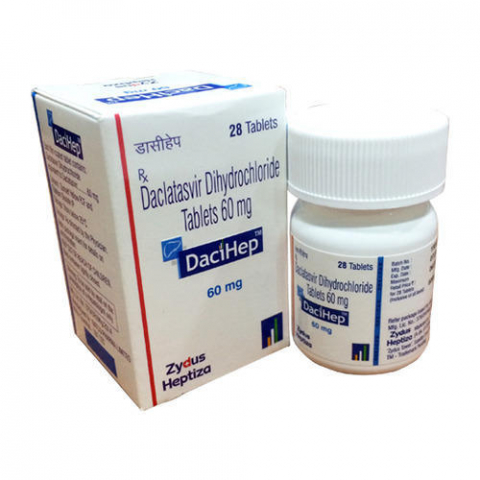 A virus which causes severe life threatening conditions is known as Hepatitis C virus that is a RNA virus, Chronic hepatitis Cirrhosis Hepatocellular carcinoma Dacihep  is an anti-viral medication, which is available in tablet form. Dacihep  perform its action by inhibiting the non structural 5A protein region of hepatitis C virus Dacihep  is not monotherapy medicine; it should be combined with other anti-viral drugs for treating chronic hepatitis C infection caused by virus Dacihep  is available in the strength of 30mg, 60mg, and 90mg

The peak plasma concentration of Dacihep  occurs within 2 hours. The mean bioavailability of Dacihep  is 67%

The volume of distribution occurs at 47L. The human plasma protein bound with Dacihep  with the range of 99%

Dacihep  a CYP3A substrates, it is dominantly metabolized by CYP3A4 isoenzymes High portion of drug in plasma is in unchanged mode nearly 97%

The route of elimination of metabolites; Elimination of drug via Bile: 88%; feces 53% (unchanged form) and 6.6% in unchanged form through urine The mean terminal half life period of Dacihep  occurs from the range of almost 12 to 15 hours

Before initiating the therapy; NS5A resistance testing in HCV genotype 1a infected patients with cirrhosis has been evaluated The usual dose of Dacihep  is 60mg as a single dose Recommended dosage regimens:

There is a risk of adverse effects due to concurrent use of  Dacihep  with some other drugs may causes; loss of therapeutic effect serious life threatening conditions symptomatic bradycardia while using with amiodarone risk related to ribavirin during combination hepatitis b reactivation

Dacihep  is a prescription medicine; it should be used only under the guaindance of doctor Do not self medicate If patient fail to take the dose of Dacihep  tablet, must consult with physician and take the missed dose within the time Or the missed dose should be leave and continue the regular dosing schedule Do not take overdose.