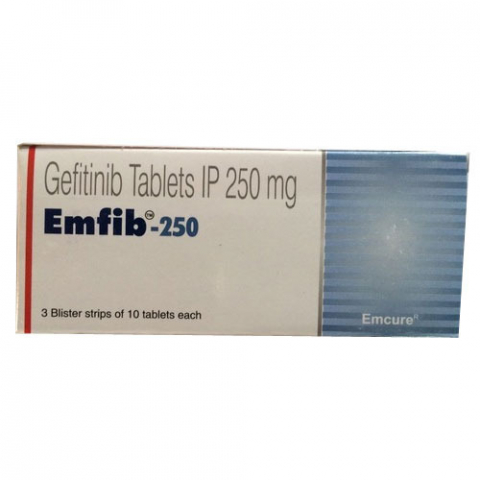 The suggested dosage of Emfib tablets is 250mg should be administered orally as a single dose. The missed dose should not be taken within 12 hours of next dose.

Emfib tablets are administered orally by taking with or without food. If patients are unable to take the tablets through mouth, must disperse tablets in a 4 to 8 ounces of water and mix it well, then drink the liquid immediately or taken via naso-gastric tube.

Stop the Emfib therapy, if patients have any of the following effects such as; Elevation of ALT & AST levels; Severe ocular disorders like keratitis High skin reactions Acute upraising or aggravation of pulmonary symptoms like cough, fever, dyspnea

EMFIBTHERAPY SHOULD BE DISCONTINUING FOREVER; IN CASE OF

Emfib therapy is discontinued and immediately examine for ILD in any patients who have acute respiratory problems.

Patient getting Emfib therapy, accidentally elevate AST & ALT levels and increased bilirubin levels leads to cause hepatotoxicity and to rescue from this condition discontinue the therapy.

Ocular disorders like corneal erosion, aberrant eyelash growth may occur during the therapy of Emfib. To avoid this problem discontinue the Emfib therapy.

Skin disorders like Stevens Johnson’s syndrome, epidermal necrolysis & Erythema multiforme formed during the therapy. Emfib therapy should be suspended or break off.

THE ADVERSE EFFECT OF EMFIB TABLETS

Emfib tablet combined with strong CYP3A4 inducers like phenytoin, rifampicin, or tricyclic depressant may leads to decreasing the plasma concentration of Gefitinib because of increasing the metabolism. To avoid this problem, while concomitant with these drugs, the dosage of Emfib is increased to 500mg, maintained by 250mg for 7 days after stopping the CYP3A4 inducers. Co administration of Emfib with strong CYP3A4 inhibitors like itraconazole causes elevating the plasma concentration of Gefitinib due to decreasing in metabolism.

Emfib combined with gastric regulator, causes depletion of plasma concentration of Gefitinib. Gastric regulators like proton pump inhibitors, H2 receptors antagonist, or antacids. Emfibtablets are taken 12 hours after the last dose or 12 hours earlier to proton pump inhibitors; Emfib tablets taken at 6 hours after or earlier to the dose of H2 receptor antagonist or antacids. Emfib with warfarin leads to produce hemorrhage, to avoid this problem patients monitored frequently for prothrombin time alteration.

Pregnancy category: D Emfib produces fetal harm, even to death. Emfib tablets should not be recommended in pregnancy period; sometimes it may leads to miscarriage. Breast feeding should not be suggested in lactating period.

Emfib tablet is a chemo medicine; it is used only under the supervision of medical oncologist. If patient fail to take the dose of Gefitinib must consult with certain medical adviser and take the missed dose. Otherwise the missed dose should not be taken within 12 hours of following dose. In this condition, skip the missed dose and follow the regular schedule.