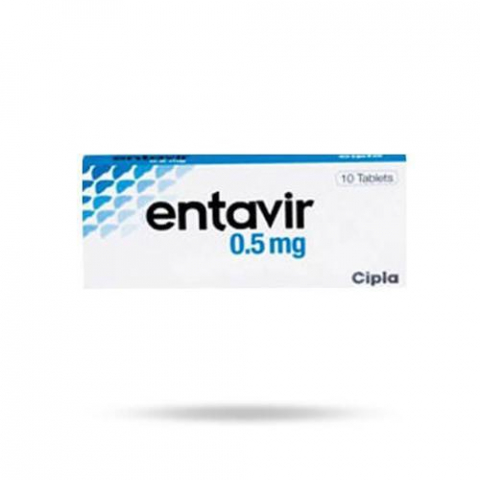 Entavir  applicable in tablet form in the strength of 0.5mg   used to treat hepatitis B viral infection

Entavir    applicable in tablet form in the strength of 0.5mg   used to treat hepatitis B viral infection, Entavir   containing an active ingredient like Entecavir which is broadly used anti-viral agent, which produce admirable action while compared to previous medicines like lamivudine or Adefovir.

Entavir   expose an anti-viral activity against hepatitis B viral infection by associating with inhibition of three stages of viral aggregation process. Entavir   is a guanine analogue. A Entavir   tablet is widely used in adolescent patient, and in pediatric with age of 2 years or older.

Entavir   containing Entecavir exhibits its anti-viral activity by prohibiting three steps in viral production; Entavir   is an anti-viral medicine, which is guanosine nucleoside analogue effective against HBV infection. Entavir   is encounters with natural substrate deoxyguanosine triphosphate. Entavir   interferes with three activities of HBV polymerase; Base priming from pregenomic messenger RNA, Reverse transcription of negative strand occurs Integration of positive strand of HBV DNA. A Entavir   tablet has Entecavir, which is inserting into viral DNA has extreme effect of prohibiting the HBV polymerase activity.

Oral administration of Entavir   0.5mg   with high fat meal causes decreasing the absorption, depletes Cmax of 44 to 46%, decreases AUC of 18 to 20%.

The volume of distribution is exuberance of total body water; Entecavir is largely distributed into tissues. The binding of Entecavir with serum proteins occurs relatively 13%.

Entecavir should not be considering as cytochrome P450 enzymes substrate, inhibitor or inducers, which is adequately phosphorylated into an active triphosphate form.

Entavir   tablets after metabolism get eliminated via kidneys, in an unchanged form with the range 62% to 73%. The plasma concentration of Entavir   depletes in bi-exponential manner with the mean terminal half life period of relatively 128 to 148 hours and the phosphorylated metabolite half life is 15 hours.

The critical points take into consideration, while starting the therapy with Entavir   tablets; Indication of Entavir   is established by clinical trial data in nucleoside inhibitor-therapy naïve and lamivudine resistant patients with HBeAg positive and HBeAg negative HBV infection and compensated liver cirrhosis & decompensated cirrhosis. Entavir   is used in pediatric patients with 2 years of age or older, with treatment naïve, lamivudine resistant with HBeAg positive HBV infection & compensated liver cirrhosis. Main indication: Entavir   tablets are used to treat chronic hepatitis B viral infection commonly in adolescent patients with the sign of viral multiplication and other information of lasting elevation of serum aminotransferase or active disease.

Entavir   tablets should be taken on an empty stomach (partially 2 hours after a meal or two hours earlier to the next meal). The usual prescribed dosage of Entavir   tablets;

In decompensated condition, the suggested dosage is 0.5mg   of Entavir   should be taken as once a day.

Some precautions should be taken while starting therapy with Cronivir

IN SEVERE ACUTE AGGRAVATION OF HEPATITIS B:

Entecavir has not assessed in HIV/HBV co infected patients who are not concurrently taking effective anti-retroviral therapy. Entavir   tablet used for HBV infection in patients who are infected with HIV, produce resistant to HIV nucleoside reverse transcriptase inhibitors, not exist to treat. Entavir   should not be suggested to HBV/HIV co infected patients, also not receiving HAART. To overcome this type of condition, patient should be examine with HIV antibody testing before the therapy.

IN LACTIC ACIDOSIS & HEPATOMEGALY WITH STEATOSIS

This condition may occur due to the combination of nucleoside analog with anti-retroviral agents, this may happen mostly in women. The major fatal cases of this condition is obesity and extended nucleoside exposure. Lactic acidosis frequently occurs in decompensated liver cirrhosis patients, the only way to reduce this adverse is discontinuing the treatment with Entavir   .

Depending upon creatinine clearance, the dosage of Entecavir is suggested for patients who are having renal damage. They may follow the dosage adjustments. The safety and effectiveness of Entecavir in hepatic impaired patients has not been evaluated. If Entavir   is necessary to take in hepatic impairment patients, who are already receiving Immuno suppressant like cyclosporine, Tacrolimus or sirolimus causes affecting the renal function. Patient must examine periodically before or after the therapy using with Cronivir

If over dosage of Entecavir occurs, confirmation of toxicity should be taken and provide supportive measures. Following 0.5mg   of Entecavir, nearly 13% of Entecavir dose should be eliminated by hemodialysis method.

The pregnancy category of Entavir   tablets is C Entavir   tablets should not be used in pregnancy condition. Entavir   used in pregnancy for necessary condition, if risk and benefits are clearly known. In animal clinical studies reveals that Entecavir is excreted in human milk, but human data is not applicable. Breast feeding should be avoided, because most of the drugs are eliminated in human milk. To avoid problems related to Entecavir, it should be taken into consideration.

Entavir   tablets should be stores at below 30°C Keep away from light, moisture and heat.

Entavir   is used in chronic hepatitis B infection, if dose of Entecavir is fail to take by the patients, must consult with medical practitioner and take the dose within a time. On the other hand the missed dose is avoided and follows the regular schedule.