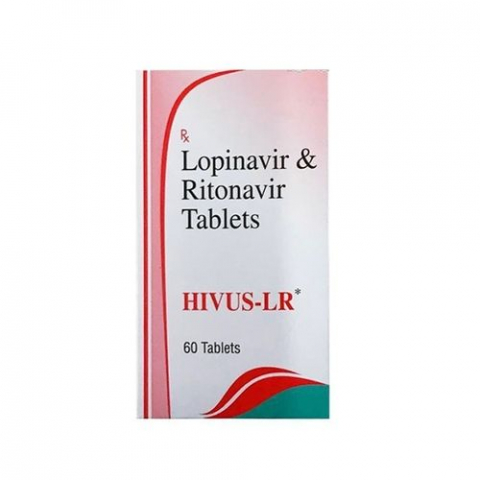 Hivus LR  is mainly indicated for treating in patients suffering from HIV-1 infection by combining with other anti-retroviral drugs.

Hivus LR  tablets belongs to the type of anti-retroviral agent which includes Lopinavir & ritonavir as an active substances. The two component included in Hivus LR  tablets are classified pharmacologically as protease inhibitors.

Hivus LR  is notify as fixed dose combinational treatment which is also used with other HIV drugs. Hivus LR  tablets are not a curable disease, Hivus LR  is a prescription drugs that is used in adults and pediatric with 14 days of age or older by only under the guidance of physician.

Hivus LR  is mainly indicated for treating in patients suffering from HIV-1 infection by combining with other anti-retroviral drugs.

Hivus LR  consist of protease inhibitor activity component, display an anti-retroviral activity. The two composition Lopinavir & Ritonavir are undergoes action by prohibiting the protease enzymes which is effective for separation of gag-pol polyproteins which is specific for viral group production. This process is inhibited by interfering with protease enzyme activity and finally concludes as end of production of virus. The production of immature non infectious virus occurs.

After oral administration the peak plasma concentration of Lopinavir occurs at 4 hours approximately. While taking Hivus LR  with or without food no alteration of pharmacokinetic effect occurs.

In adults, the prescribed dose of Hivus LR  is 400mg/100mg that is 2 tablets of Hivus LR  It should be administered orally as two times a day.

Diabetes mellitus: Patients blood glucose level should be maintained by checking the levels frequently. QT prolongation: Stop the therapy. Immune reconstitution syndrome: Discontinue the Hivus LR  treatment Fat redistribution: Reaccumulation of fat occur which may results as obesity. In severe condition, discontinue the therapy. Drug interaction-CYP3A enzyme prohibition, causes increased plasma concentration of concurrent used drugs. Avoid the concomitant use. Toxicity occurs to neonates, potential risk may occur while using Hivus LR  in neonates. Take alcohol & propylene glycol from all the drugs should be given to infants for reducing thwe toxicity associated to the components.

Elevation of triglyceride levels may leads to cause pancreatitis. Pancreatitis is the major risk factor during the Hivus LR  treatment. Lipase and amylase value should be monitored periodically.

Pregnancy category: C Hivus LR  should not be used in both pregnancy and lactating period.

Hivus LR  drug should be stored at 20°C to 25°C. Protect the drug from heat, moisture & light.

In case of missed dose, patient should be following the instructions provided by medical adviser. Missed dose of Hivus LR  should be avoided. Regular dosing schedule should be maintained.