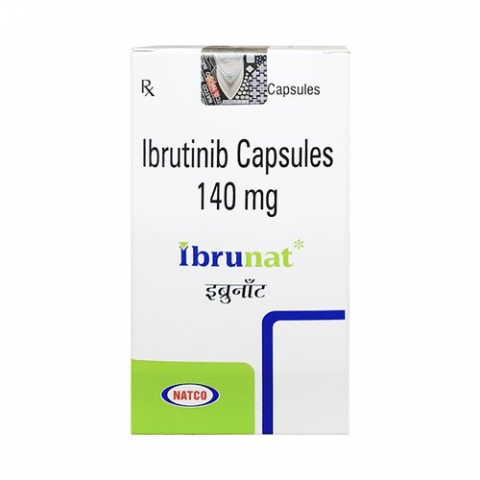 Ibrunat 140mg  attacks B lymphocytes (B cells) and is therefore necessary to treat B-cell lymphomas.

Ibrutinib prohibits the Bruton's tyrosine kinase (BTK)function. BTK is a basic signaling molecule of the B-cell receptor signaling complex which plays an important role in the endurance of malignant B cells.

Ibrutinib stops signals which prompt malignant B cells to develop and multiply uncontrollably.

Absorption:
Time to peak plasma concentration of Ibrunat 140mg is 1-2 hours and drug taking with food will increases ibrutinib exposure.
Distribution:
Human plasma protein level is 97.3% and Vd is 10,000L
Metabolism:
Metabolized to several metabolites mainly by cytochrome P450 CYP3A, and to a minor extent by CYP2D6
Elimination:
Ibrunat 140mg was excretion via feces 80% and urine 10 %
Half-life of Ibrunat 140mg is 4-6 hours

When combination of Ibrunat 140mg  with strong or moderate CYP3A inducers will reduces ibrutinib plasma concentrations.

Pregnancy category is D;
While on treatment Ibrunat 140mg  avoid becoming pregnancy and for up to 1 month after ending treatment.