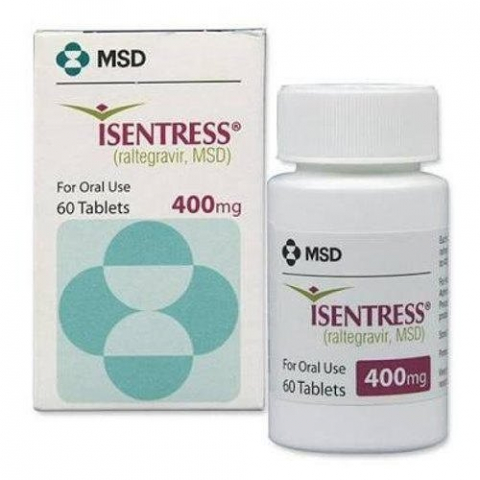 Raltegravir is chemically categorized as derivative of pyrrolidinone. Isentress tablets are therapeutically classified as anti-retroviral medicine by containing an active ingredient known as Raltegravir which is effective against HIV infection.

Raltegravir is chemically categorized as derivative of pyrrolidinone. Isentress tablets are therapeutically classified as anti-retroviral medicine by containing an active ingredient known as Raltegravir which is effective against HIV infection.

Isentress tablets are indicated for treatment of HIV-1 infection by combining with other anti-retroviral medicines. Thus the evidence is based on examining the plasma HIV-1 RNA levels. The indication of Isentress is based on assessment of safety, tolerability, pharmacokinetic parameters & efficacy of Raltegravir.

Isentress containing Raltegravir aimed the integrase which is an enzyme that incorporates the viral genetic material into human chromosome, a critical step in HIV pathogenesis.

Raltegravir is largely bound to human serum protein by 83%. It is distributed in red blood cells at minor range.

Majorly in liver metabolism of Isentress is occurs

Skin reactions like Stevens Johnson syndrome & toxic epidermal necrolysis are some of fatal cases occur. In case of life threatening condition, therapy should be discontinue and provide the general supportive therapy. Clinical status should be appropriately monitored for reducing the manifestations.

This fatal condition is commonly occurred in patients who are receiving anti-retroviral treatment. Provide safety measures In severe condition, stop the treatment.

Raltegravir chewable tablets are containing a component like phenylalanine (aspartame component) which is responsible for this fatal case.

The pregnancy category of Isentress is C.   Isentress should not be used in pregnancy and lactating period.

Isentress is an anti-retroviral medicine, in case of missed dose condition patient should be consult with medical practitioner and follow the guidance Maintain the regular dosing schedule.