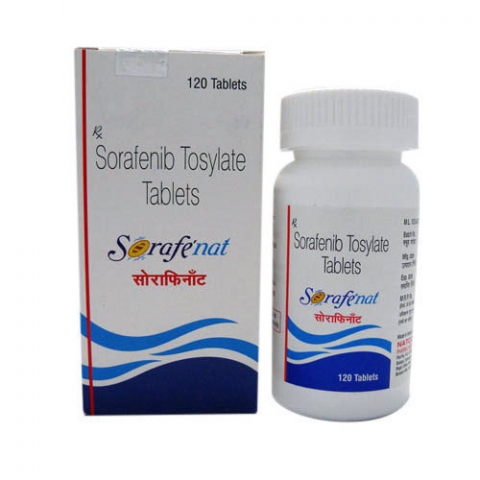 Sorafenib sold under the brand name Sorafenat. Sorafenat belongs to the group of tyrosine kinase inhibitor or inhibitor of angiogensis. The drug is a type of targeted therapy Sorafenat is a prescription drug used under the supervision of health care provider.

WORKS IN THE BODY

The drug Sorafenat has Human plasma protein bound is 99.5%

In liver Sorafenat is highly metabolized, it go through oxidative metabolism with the help of CYP3A4 and Glucuronidation by UGT1A9 The main flowing metabolite in serum is pyridine N oxide

The usual dose of Sorafenat is given as 400mg should be taken orally as twice daily for at least one hour before or two hours after the meal.

Sorafenat should not be used, in case of lung cancer, being treated with platinum containing chemo drugs and taxol drugs Sorafenat able to cause heart problems, stop the medicine in case of dizziness, fainting, sweating or shortening of breath Sorafenat causes severe bleeding; care should be taken while getting Sorafenat Stop the Tablet Sorafenat in case of;

Category D: Sorafenat can harm to an fetus and cause injury and even death to the unborn baby if you treatment during the 2nd and 3rd trimesters of pregnancy, pregnant women do not use the Sorafenat medicine without the knowledge of your doctor.

The medicine passes into breast milk is not known or could harm a new born baby. Do not use Sorafenat medication, if your breast feeding.

If patient missed to take Sorafenat tablet, they may get advice from medical practitioner (consult) for administration of the missed dose within the time Or the missed dose should be skipped and follow the next dosing schedule Do not have double the dose.