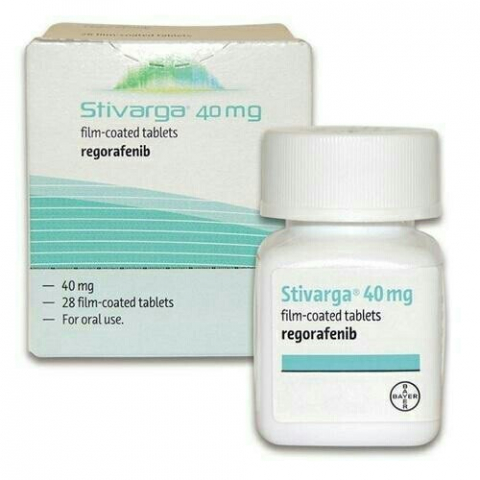 Stivarga 40mg is an anticancer drug which is;

Stivarga 40mg consist of protein kinase inhibitor with a similar structure to sorafenib. It is hoping to act by prohibiting multiple signalling pathways contains in angiogenesis and tumour growth.
Stivarga 40mg is commonly given after other chemotherapy have been tried without success.
Stivarga 40mg which is used asprescription drugs under the supervision of medical practioners.

Stivarga 40mg is an anticancer drug which is;

Regorafenib consist of systemic therapy which works throughout your body to promote fight certain cancers. Regorafenib belongs to a multikinase inhibitor, may work by stopping some proteins on certain normal and cancer cells. In this way, Regorafenib may inhibit cancers from growing and spreading for a period.

Cancer contains the uncontrolled growth of certain cells in the body.

Regorafenib may interfere with the signals whichinform cancer cells to replicate and may slow the cancer from spreading to other parts of the body.

• Have high risk for HFSR/PPES and rash; a more incidence of HFSR resulted in Asian patients; stop and then reduce or stop regorafenib depending on severity and persistence of dermatologic toxicity.
• While on treatment with Stivarga 40mg will occur Myocardial ischemia and infarction seen in clinical trials; withhold Nublexa for new or acute cardiac ischemia/infarction and restart only after resolution of acute ischemic events.
• When administrating Nublexa 40mg, one case report of reversible posterior leukoencephalopathy syndrome (RPLS) occurred (1 of 1100 treated patients); discontinue therapy if RPLS occurs.
• Using Stivarga 40mg treatment will have Serious drug-induced liver injury with fatal outcome appeared in Nublexa-treated patients in clinical trials. Some of the cases, liver dysfunction occurred within the first 2 months of treatment and was characterized by a hepatocellular pattern of injury.
• When administrating Stivarga 40mg will have heavy risk for haemorrhage; stop therapy for severe or life-threatening haemorrhage
• When administrating Stivarga 40mg will have high risk of infections resulted; most common infections includes urinary tract infections, nasopharyngitis, mucocutaneous and systemic fungal infections and pneumonia

Pregnancy category D: The drug has no data available on use in pregnant women. Inform pregnant women about the probable hazard to a foetus.

Excretion into human milk is unknown.
Do not breast feed during the treatment with Nublexa 40mg.

Store the Stivarga 40mg at 25°C (77°C).
Keep the drug in its original container bottle.