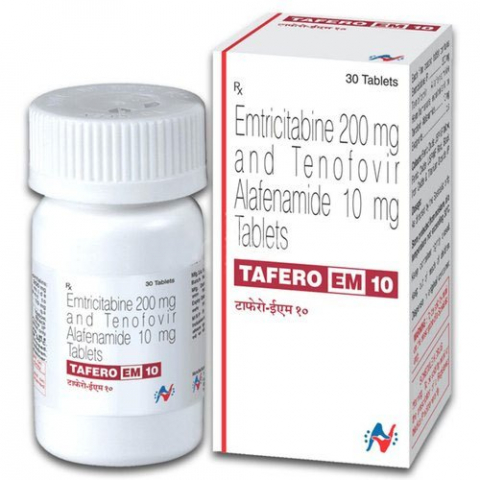 Classification: Anti-retroviral drug TAF and Emtricitabine are nucleotide reverse transcriptase inhibitor that involved in suppression of growth of HIV virus associated with AIDS

Tafero EM is a fixed dose combination drug, which contains two excellent components like tenofovir Alafenamide fumarate and Emtricitabine Tafero EM is a prescription medicine, used by the patients only under the knowledge of medical practitioner

TAF is a novel ester prodrug of anti-retroviral tenofovir, and it is a nucleotide reverse transcriptase inhibitor After an oral administration, TAF is transformed into tenofovir Tenofovir (acyclic nucleoside phosphonate analog of adenosine 5 monophosphate) Tenofovir depletes DNA binding, there is a lack of 3 OH molecules (water molecules are responsible for phosphodiester bond linkage) By opposing the regular nucleotide for insertion into proviral DNA and blockade of formation of 5 to 3 phosphodiester linkage which is needed for DNA elongation Tenofovir leads to chain termination and block proviral DNA transcription

Tafero EM ; the absorption of tenofovir is occur fastly and its Tmax is observed at 1 hour after administration; whereas Emtricitabine is absorbed rapidly and its mean bioavailability is 93%

The prescribed dose of Tafero EM in the condition of HIV-1 infection in adults is, one tablet should be taken once daily with or without food. In Pre-exposure Prophylaxis: uninfected adults should take one tablet orally as a single dose.

Tafero EM should not be used in persons with unknown or positive 1 status. Tafero EM not used as monotherapy, it is used with other retroviral medicine. Hypersensitivity in lactation .

If patient fail to take the dose of Tafero EM tablet, must consult with medical practitioner To avoid overdose toxicity problems, skipped the missed dose and follow the regular dosing schedule Do not take double dose