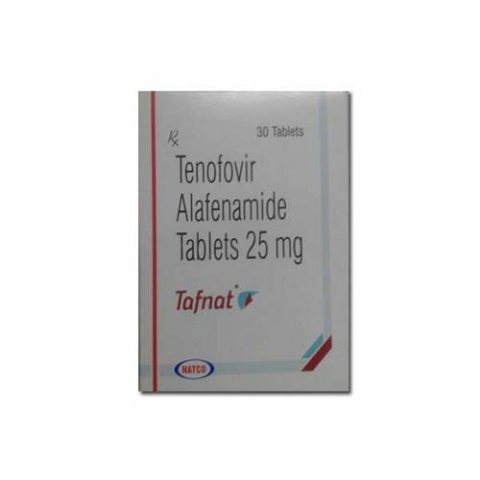 Tafnat tablet, used in HIV-1 infection Tafnat tablet is also indicated for the treatment of hepatitis B viral infection

Tenofovir Alafenamide is an anti-hepaciviral & anti-retroviral medicine. In HIV infected patients, Tafnat is not used alone and it may combine with some other anti-retroviral drugs like Emtricitabine, cobicistat, or darunavir.

At first, Tafnat is belongs to anti-retroviral (nucleoside reverse transcriptase inhibitor), now Tafnat has anti-hepaciviral property which is used against hepatitis B viral infection

Prior usage of Tafnat tablet, used in HIV-1 infection Tafnat tablet is also indicated for the treatment of hepatitis B viral infection, by reducing the advancement of virus Tafnat used in chronic hepatitis B infection, is non-curable but it can able to prevent the viral transmission

Tafnat -Tenofovir Alafenamide (TAF) TAF is a prodrug of tenofovir (parent drug) At first, TAF is penetrating into hepatic cells because it has lipophilic cell permeable capacity. After enters into the cells, TAF undergoes hydrolysis by using carboxylesterase-1 and to formed as tenofovir. Tenofovir involved in intracellular metabolism, which is phosphorylated into tenofovir triphosphate. Tenofovir triphosphate is considered as an active metabolite which has anti-viral property and integrated into viral DNA by hepatitis B reverse transcriptase enzyme and leads to inhibits viral production thus results as termination of viral chain.

HOW TO TAKE TAFNAT TABLET

The usual dosage of Tafnat tablet is, one tablet containing 25mg of Tenofovir Alafenamide should be taken as a single dose Tafnat tablet should be administered with food In creatinine clearance range <15ml/min, Tafnat is not recommended In decompensated cirrhosis: Tafnat should not be recommended Before initiating the therapy: Patients should examine HIV-1 infection for recommending combination of other anti-retroviral drugs in HIV-1 positive patients.

HOW THE BODY WORKS FOR TAFNAT TABLETS

SOME DRUGS MAY INTERACT WITH TAFNAT TABLETS

After cessation of anti-hepatitis B therapy by using with Tafnat tablet, concluded in serious intense aggravation of hepatitis B infection. To avoid this adverse condition in the patients, liver function should be observed frequently.

Tafnat is rational use, in some patients placental transformation happens In breast feeding and lactation condition, Tafnat is used only under the guidance of medical practitioner.

Tafnat tablets container is stored under room temperature below 30°C Tafnat container should be kept in dry and cool place and should be free from heat, moisture Protect from light

In over dosage condition, two steps follows 1. Examine the deposition of toxicity and symptoms occurred due to over dosage 2. Hemodialysis, a method involved in eradicating the over dosage of Tafnat with separation coefficient of 54%