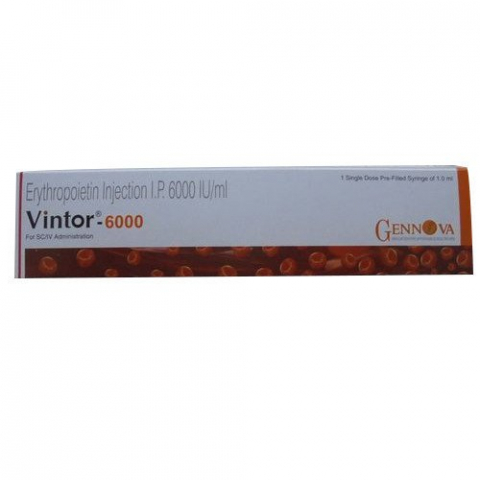 Vintor  (EPO) is a hormone included by the kidney which promotes thered blood cells formation by the bone marrow. The kidney cells which make Vintor  are sensitive to low oxygen levels in the blood that travels through the kidney.

These cells make and release Vintor   when the oxygen level is too low. A low oxygen level may indicate a diminished number of red blood cells (Anemia), or haemoglobin molecules that carry oxygen through the body.

Patients for the treatment of Anemia because of concomitant myelosuppressive chemotherapy, and upon initiation, there is a minimum of two additional months of planned chemotherapy. Patients for the reduction of allogeneic RBC transfusions in patients undergoing elective, noncardiac, nonvascular surgery.

Duration to maximum plasma concentration of Vintor   is 20 to 25 hours and bioavailability of SC injectable Vintor  is much lesser than IV injection and is 20-24%. Adult and paediatric with CRF peak plasma level is 5 to 24 hours

Vintor  has no plasma protein binding. Volume of distribution is range of 40-63.80 ml/kg

Vintor   injection are eliminated through uptake and degradation via the EPO-R-expressing cells and may also contain other cellular pathways in the interstitium. Only a less amount of unchanged epoetin alfa is found via urine. Half-life in adult is 4 hours and for children is approx. 6 hours Adult and paediatric with CRF the half-life is 4 to 13 hours

DOSAGE AND ADMINISTRATION OF VINTOR  INJECTION

Administer Evaluation of Iron Stores and Nutritional Factors Monitoring of Response to Therapy in Anemia Formulation Based Selection In pregnant women, lactating women, neonates, and infants use only single-dose vials (the benzyl alcohol-free formulation)

When starting or adjusting therapy, monitor haemoglobin levels at least weekly until stable, then monitor at least monthly. Avoid rises of the dose more frequently than once every 4 weeks. Reduces in dose can occur more frequently. Avoid frequent dose adjustments. If the haemoglobin increases rapidly, decrease the dose of Vintor  by 25% or more as required to reduce fast responses.

FOR ADULT PATIENTS WITH CKD ON DIALYSIS

Start Vintor  therapy when the haemoglobin level is less than 10 g/dL. If the haemoglobin level approaches or exceeds 11 g/dL, decrease the dose of Erypro safe. The usual starting dose for adult patients is 50 to 100 Units/kg 3 times weekly IV or SC. The intravenous route is prescribed for patients on haemodialysis.

FOR PEDIATRIC PATIENTS WITH CKD

Start Vintor  therapy only when the haemoglobin level is less than 10 g/dL.If the haemoglobin level approaches or exceeds 12 g/dL, reduce or interrupt the dose of Erypro safe. The usual starting dose for paediatric patients (ages 1 month or older) is 50 Units/kg 3 times weekly intravenously or subcutaneously.

The prescribed initial dose in adults is 100 Units/kg as an IV or SC injection 3 times per week. Discontinue Vintor  if an increase in haemoglobin is not achieved at a dose of 300 Units/kg for 8 weeks.

Vintor  overdose can cause by above the desired level of haemoglobin levels, which must be controlled with discontinuation or reduction of  Vintor   dosage with phlebotomy.

SIDE EFFECTS CAUSED DUE TO VINTOR  INJECTION

Patients go through surgery are at high risk for DVT; concomitant DVT prophylaxis is strongly recommended In Zidovudine-treated patients may have response only when zidovudine dosage <4200 mg/wk. and endogenous epoetin <500 U/mL In Dialysis patients having IV administration recommended to decrease red-cell aplasia risk; rises anticoagulation with heparin may be needed to prohibit clotting of extracorporeal circuit during haemodialysis Avoid increase dose more frequently than once monthly.

Patients Contains albumin; may carry extremely specific risk for transmission or viral diseases or Creutzfeldt-Jakob disease. In Cases of PRCA and of severe Anemia, with or without other cytopenia’s that appears following the growth of neutralizing antibodies to erythropoietin resulted in patients treated with epoetin alfa High incidence of death, myocardial infarction (MI), stroke, and thromboembolism: while Using ESAs to aim haemoglobin level of >11 g/dL rises risk of severe adverse cardiovascular reactions

Vintor  co administration with methyltestosterone will make high effects of epoetin alfa by pharmacodynamic synergism. Because of potential adverse effects of drug combination should be avoided

Concomitant use with danazol and fluoxymesterone, oxandrolone, oxymetholone will increase effects of epoetin alfa by pharmacodynamic synergism. Androgens used will reduce needed dose of epoetin alfa.

The limited available data on pregnancy women have insufficient to describe a drug associated risk of adverse development outcomes. Vintor  from multiple dose which contains benzyl alcohol is contraindicated to pregnant women. If pregnant women needed treatment with Vintor  then use benzyl alcohol free formulation to avoid harm to foetus.

Vintor  from multiple dose which contains benzyl alcohol is contraindicated to lactating women. Advise the breast-feeding women not to feed for at least 2 weeks after the last dose. Possible similar harm to infants exposed to benzyl alcohol through human milk.

Store at 2°C to 8°C Do not freeze the injection Avoid using of shaken or frozen Vintor  injection, do not shake Store the injection in original container until use to away from light

If dose is failed to take by patients then immediately have the dose you remember before next dose otherwise skip the missed, if next dose time reached. Do not take extra dose at a time. Take advice of the doctor about missed dose