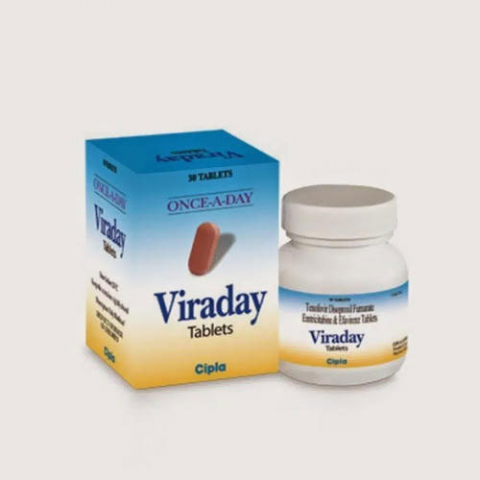 Viraday     is a single tablet drugs consist two types of anti-retroviral medicines which is active against HIV-1 infections.

Viraday     is a single tablet drugs consist two types of anti-retroviral medicines which is active against HIV-1 infections.

Viraday     tablet must be administered on an empty stomach, especially at a bed time for reducing neurological disorders. Viraday     should be used in adults & pediatric patients with age of 12 years or older. The usual advised dose of Viraday     is one tablet to be taken orally as a single dose. Dosage alteration is not possible because Viraday     tablet are a fixed dose combination.

It should not be suggested in both moderate & severe renal impaired patients with creatinine clearance below 50ml/min. The combination therapy of Viraday     with rifampin, with patient weight about 50kg or more. In this scenario the dose of efavirenz should be elevates to 200mg per day.

Patients should be examine correctly whether patient may suspected with HBV infection or not. The potency of Viraday     has not been monitored for chronic HBV infections The Viraday     treatment should be interrupt or discontinue while In lactic acidosis or hepatic steatosis To overwhelmed the problem by checking patients ECG, provides alternative medications.in case of QT extension While taking Viraday     at bed time the Neurological problems should be eliminated Viraday     should not be used in pregnancy condition.