Genotypes of hepatitis C and their treatment. 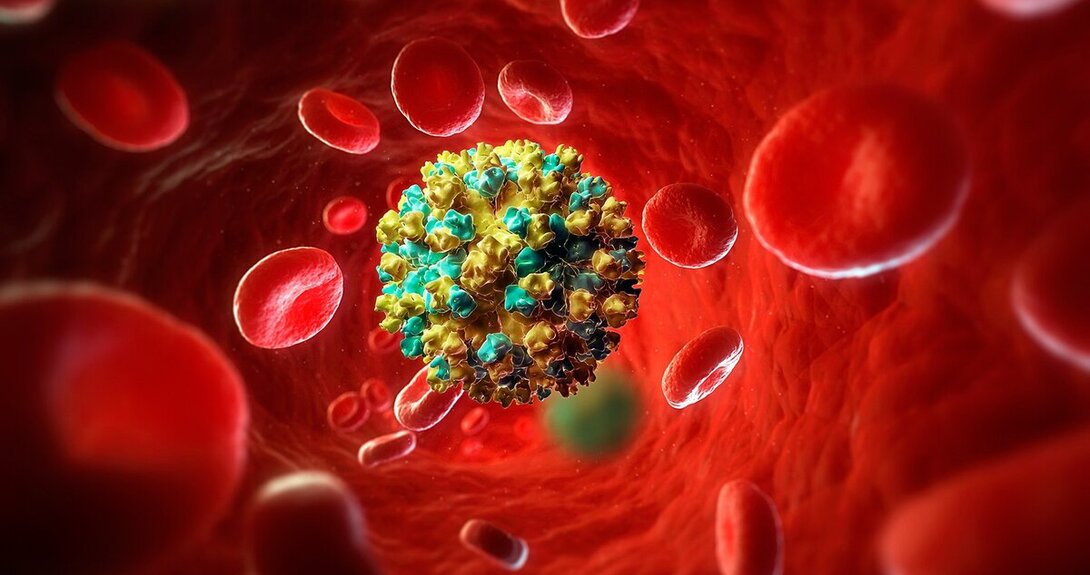 The question of how the genotypes of hepatitis C differ is of concern to many people - both those who have been diagnosed with such a diagnosis and their relatives and friends. Indeed, the problem with this extremely serious liver disease affects more and more Russians every year. We will try to tell in an accessible and detailed way about what the genotypes of the virus of this disease are, what are their differences in determining, treating, what are the features of therapy with available drugs.

Viral hepatitis C is called an affectionate killer for good reason. For many decades, it can be invisibly present in the body, and a person has no idea about it: there are no symptoms of liver damage for the time being. And all because the virus has a unique "gift" to constantly change, to be reborn with new parameters, which makes it strong and aggressive. Having learned what hepatitis C is, which genotype is more difficult to treat, one can understand the future prospects of getting rid of the disease.

Currently, scientists distinguish eleven genotypes of HCV - its genetic varieties. It is the originality of the genome of the virus that makes it possible to differentiate it into types and subtypes.

HCV is a mix of several mutated viral strains that are constantly changing. This ability gives the virus a special vitality and ensures the transition of the disease into a chronic one.

The wide range of HCV genotypes around the world suggests that it has lived in the human body since time immemorial. In modern medicine, out of 11 genotypes, such HCV genotypes are distinguished as the most common: 1a, 1b, 2a, 2b, 3a. They are also subdivided into subtypes - a total of 70.

If there are antibodies to HCV in the patient's blood, the issue of clarifying his genotype becomes relevant. This will allow you to accurately determine what will be the treatment regimen for hepatitis C 1, 2, 3 genotypes and all the rest.

To determine the genotype of HCV, it is necessary to make a genotyping procedure, which consists in using the PCR method. This method helps to accurately determine the genotype of the virus using conservative (unchanged) pieces of the genome. And the success of the treatment of the disease depends on the efficiency and accuracy of this procedure.
Usually, in order to avoid mistakes in the PCR method, hepatologists prescribe patients to do it three times. This tactic gives the highest accuracy in determining the HCV genotype.
Also, patients are very interested in the question: if hepatitis C, genotype 3 is diagnosed, will generic treatment be effective? And how effective is the therapy for the rest of the genotypes of the virus? We want to immediately clarify and reassure our website visitors: drugs of the latest antiviral generation work miracles and cure at least 95% of patients with any HCV genotype.

HCV type 1 was detected in two genotypes - 1a and 1b. Moreover, the most common and is detected in the overwhelming number of cases is type 1b. It often provokes the most severe consequences for the liver: failure and cirrhosis, intoxication of all organs and systems. It is the 1b virus that causes the transition of the disease to the chronic stage in 90% of cases. Statistics note that this HCV genotype can most often be transmitted sexually. The transmission of the 1b virus also occurs by injection, with blood transfusion, from a sick mother to a child at birth.

In recent times, with traditional interferon treatment, recovery was achieved only by 50% of patients who were diagnosed with this genotype of the virus. Now the picture is different: hepatitis C genotype 1 - generic treatment allows achieving at least 96% of the cure.

Table of the effectiveness of treatment of hepatitis C genotype 1:

1b HCV genotype - it is also called Japanese - is found everywhere, it is detected in almost 80% of patients. Most often occurs in cases where there has been a transfusion of blood or its components. Hepatitis in patients with this genotype of the virus is characterized by resistance to treatment by traditional methods - with the help of peginterferons and ribavirin. Moreover, it was this genotype that was more inclined than others to give relapses of the disease after long and persistent treatment. That is why the question of how to treat hepatitis C, genotype 1b, is still extremely relevant for hundreds of thousands of people.

In the picture of clinical manifestations of HCV genotype 1b, such signs as chronic fatigue, drowsiness, unexplained weakness, and dizziness are very often observed. This type of virus contributes with a much higher likelihood of a malignant liver tumor.

Despite the fact that the symptoms of liver damage 1b with the HCV genotype are very extensive and diverse, the disease develops in certain stages.

1. Acute stage. During this stage, a picture of a powerful infectious effect of the virus on the organ develops, the response to which is an acute inflammatory process. The treatment regimen for hepatitis C 1b in this case depends on whether it is possible to immediately recognize the enemy in the face. And the symptoms can be either clearly expressed or absent: the stage can be erased, almost imperceptibly, expressed only by asthenovegetative phenomena (fatigue, weakness, etc.). The acute stage of the disease in about a third of cases ends with the patient's recovery, in the rest it goes into a chronic course. This stage lasts about six months.

2. Stage of carriage of viruses.  During this stage, the person has no pronounced symptoms of the disease, but the hepatitis virus is detected in the body. This means that the treatment of the first genotype of hepatitis C is postponed until the manifestation of obvious signs of the disease.

In cases of self-healing, the virus can be destroyed by the body's immune forces, if not, the virus carrier becomes a source of infection. Also, with factors provoking the activation of the virus, such a person can get hepatitis himself. This stage lasts from six months to several years.

3. Latent stage.  This is the most dangerous and insidious stage of the disease, when it develops in the body, and does not give any symptoms of the disease. It can last for years, decades, manifesting itself in many severe extrahepatic diseases. It is important to pay attention to them and diagnose hepatitis C genotype 1: generic treatment is very effective at any stage of the disease.

4. Clinical stage.  This stage is characterized by obvious and serious liver damage, occurs at different times - several months or years after infection or carriage of the virus.

A cure is possible!

Despite all the serious consequences for the body that the hepatitis C virus 1b bears, the newest antiviral agents provide a uniquely effective treatment result. Its indisputable advantages are the relatively short treatment period - from 3 to 6 months, the complete destruction of the virus in at least 96% of cases, the absence of relapses and severe side effects. And no matter how the genotypes of hepatitis C differ: new-generation drugs effectively fight everyone.

Hepatologists use three algorithms for treating the disease using generics:

HCV genotype 2, which is considered the mildest form of the virus, is characterized by a less aggressive and rapid course of the inflammatory process and a higher responsiveness to therapy.
This HCV subspecies is less common than other genotypes of the virus and is considered a rare species. It is transmitted in the same ways as the others: through the blood, from a sick mother to the fetus, sexually. If hepatitis C 2 genotype is detected, its treatment with both traditional and new methods is very successful.

When HCV genotype 2 is detected, the patient's chance of contracting hepatocellular carcinoma is minimal. During therapy, it is this particular strain of the virus that shows the maximum number of completely cured patients - 100%, and the return of the disease was noted in 1 patient out of 100.

Table of the effectiveness of treatment of hepatitis C 2 genotype

In its development, the disease when infected with gentip 2 HCV goes through two stages:

Symptoms of the disease

As a rule, the picture when infected with genotype 2 HCV is generally identical to the rest of the virus varieties:

The second option is most preferable, since, according to statistics, it is he who provides a 100% result of therapy and a complete cure of patients.

HCV type 3 is detected in patients most often. Differences in the genetic structure of this modification dictate the characteristics of the course of the disease, symptoms and how to treat hepatitis C 3 genotype.

The third type of HCV is one of the most widespread in the world, including in Russia. It is detected in about a third of patients.
The features of this type of HCV are the following factors:

Symptoms of the disease with type 3 HCV have the same clinical picture as with infection with other genotypes of the virus:

Table of the effectiveness of treatment of hepatitis C 3 genotype

Traditional therapy is a long course of taking peginterferon and ribavirin, the latter being especially effective on genotype 3 of the virus. Despite this, the treatment is characterized by serious adverse reactions, therefore, it is difficult for patients to tolerate. To reduce these phenomena, a parallel intake of antihistamines, adsorbing drugs, vitamin complexes and drugs that improve the functionality of the liver are prescribed. Also, cirrhosis, which is most often detected in this HCV genotype, significantly complicates therapy. With cirrhotic changes in the liver, the effectiveness of traditional therapy is reduced by 30%.

If hepatitis C, genotype 3 is diagnosed, generic treatment is characterized by the highest efficiency, the absence of serious adverse reactions, and a relatively short course of treatment. In our company, you will find certified Indian products that are delivered to our customers' homes. We provide all documents on the origin and quality of generics at the request of our clients. The prices for medicines are officially approved by the manufacturers.

Hepatologists use as the most effective combinations of such new generation drugs:

Only the attending physician will select the most effective treatment algorithm for you.

Write a comment
0
Wishlist 0
Сompare 0
Viewed 0
Cart is empty Your requests 0
We use cookies to make the site better for you! Note: We strongly encourage you to talk with your health care professional about your specific medical condition and treatments.
<!-- /Chatra -- <script type="text/javascript" language="javascript" src="https://api.track24.ru/track24widget.js?v=1.73">